Dug up my original pitch for the Island in the dusty back shelves of the forum. Posting here for posterity, along with some of the concept artwork I've been inspired by along the way

Purpose of it: To provide inspiration, a responsive growing platform for roleplay and a few more delights for wanderers to blunder into.

What this project brings to the server as a whole: Flavour, depth and devotion to a theme and setting. Fun is the name of the game.

Setting up the Mages Academy in Saban proved more costly, and tricky than expected. Raising the tower itself from the sands was no great challenge.. but when the ground itself began to crack and churn, the Inner Circle of the council knew they had gone too far. An entire chunk of Saban rose into the air, shedding old buildings and palm trees like a snake shedding its old skin.

Thinking pragmatically, as only self-absorbed mages can, the Circle decided to run with their new creation, embracing the semblence of freedom from the 'mainland' and larger islands, floating free on the wind to pursue its own twisted designs.

Once the chunk of old desert had been stabilised, the newly founded Academy began to put dents in the startup funds contributed by who knew how many optimistic investors. Importation of goods and services would be essential to maintaining an existence apart from major cities and trade hubs. The resulting buzz of trade and acquisitions attracted any number of gold-digging entrepenuers, who over time began to use the floating Isle as a mobile base of operations, and a convenient hiding place in times of trouble. Like any shiny bauble, circling sharks do their best to take a bite, and the emerging fashion for sky-piracy in Sinfar crowded to Esus. And like any debatably benevolent ruling order, the Academy was happy to take a hefty cut in exchange for the occassional blind eye. Training mages is not cheap work after all, and tuition fees will only line ones' pockets for so long.

And so, under the watchful gaze of the Academy and its Inner Circle, the chunk of rock christened 'Esus' grew, attracting the good, the bad, the ugly.. and everything in between.

The setting will be highly magical with a suggestion of steampunk to balance the extra technology required for airship travel. Architecturally, an eclectic mix of shapes and styles, a crazy array of winding alleys, dark corners and gravity-defying towers twisting high above ones' head.

Air-ships and pleasure balloons dot the horizon in every direction, congregating at the dock where the trade that sustains this floating chunk of rock centers but also tenuously moored to personal residences and places of work.

The Academy itself forms the focal point of the Isle, around which a small township has arisen to support the corporate interests which spawned it, providing avenue for free trade over unclaimed airspace and the tempting business of pursuading sky-flying tourists to part with their purses (Legally, or otherwise). The Academy itself of course denies all knowledge of controversial business practises, maintaining a policy of 'theoretical' neutrality.. Until someone is foolish enough to attract attention or disrupt business.

Captain Rodrick will ferry visitors to a small island just off the coast, a stopover in ones' journey to the Isle floating somewhere in the air above. A pleasant place to spend a few hours while awaiting the next available air-ship, this 'medieval airport lounge' will provide a few basic amenities to entertain guests in the interim, leading on and up to the departure lounge itself where docked air-ships ferry them up to the main Isle itself.

Disembarking in 'Esus' will be a dizzying experience, the narrow stonework docking hanging off the side of the great floating rock precariously. Only a few cursory warning signs or protective railings give credence to the fact that one is floating several thousand feet above sea level, drifting on the winds. Once on firmer ground, the warren of quirky architecture circling the dockside opens up to entice visitors further in. The trade-town's lone Inn hangs on the very edge of the precipice, providing spectacular skyline-views and catering to any and all.

The road twists through a bustling courtyard until it ascends the steps towards the grand entrance to the academy itself, a mind-bogglingly tall skyscraper that seems to vanish into the cloudcover above. Inside, it is said that the Academy offers everything the budding young mage requires, and many things they would rather do without. The interior will provide facilities for a wide variety of magical disciplines, classrooms and practise chambers, and perhaps some player housing for PC's recruited as Masters/Mistresses.

The township itself presents enormous temptation for students attending the academy -not- to do their homework, and for visiting tourists to remain, indefinately, to enjoy the delights on offer. Natives take the notion of 'Flying free as the wind' to heart, and are known for offering indulgence in any name, shape or form.. and all at a reasonable and competitive rate.

Beyond the sprawling marketplaces and attractions, the township gives way to a wilder space. Hidden canyons contain dangerous secrets locked away from casual exposure, and a stretch of open desert gives ample opportunity to dispose of unwanted experiments (or students!), the practise of more illicit business and perhaps a picturesque corner or two suitable for a clandestine tryst.

Some very early renderings of how I envision Esus. 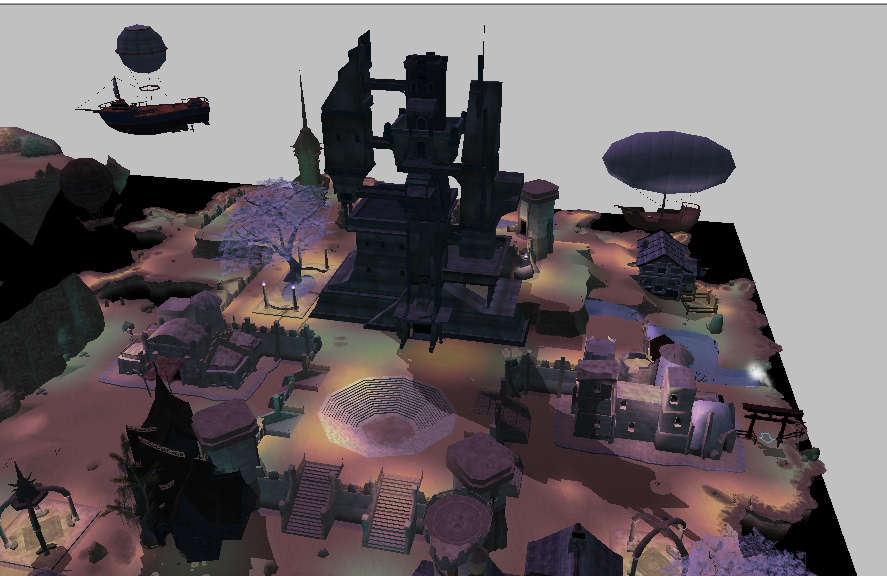 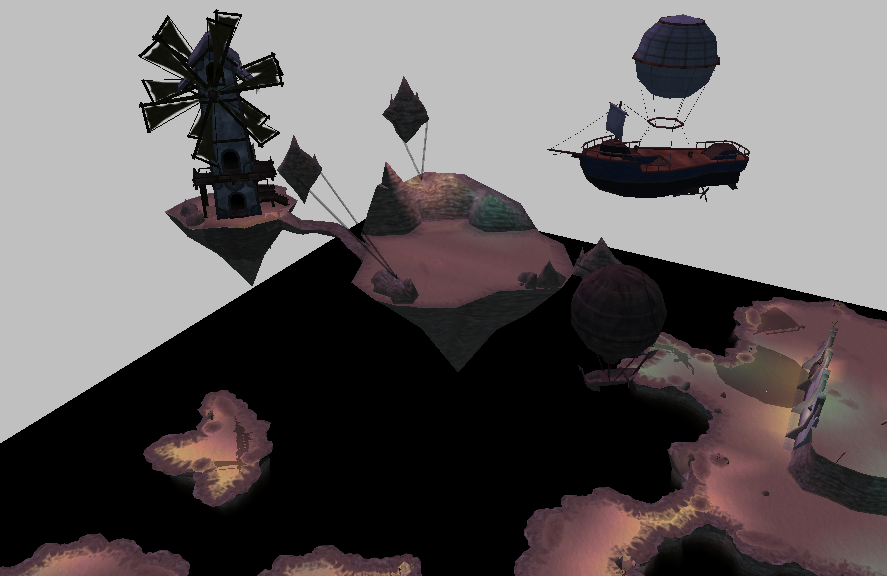 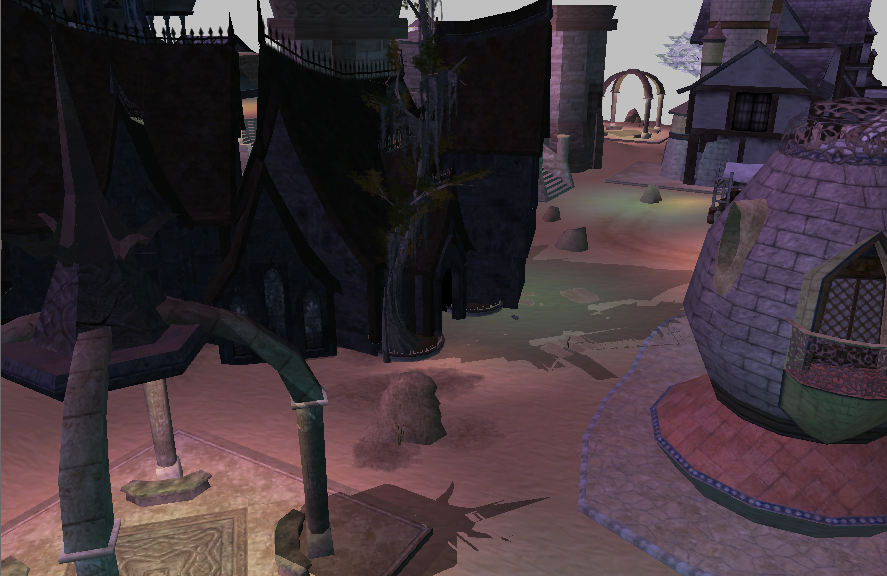 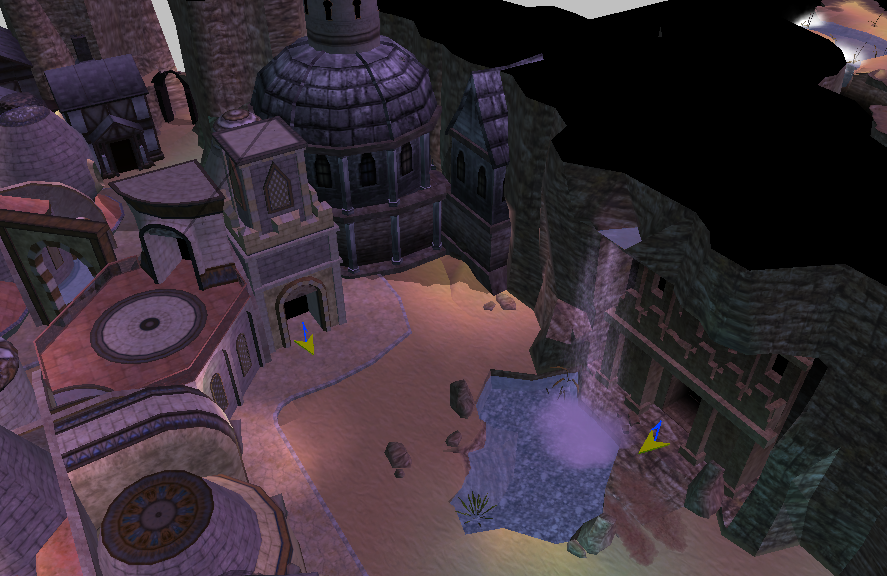 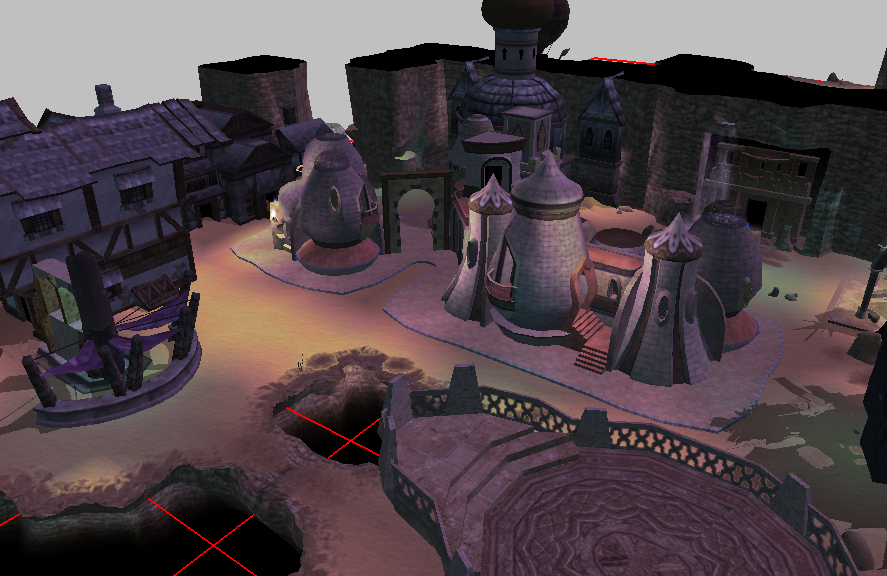 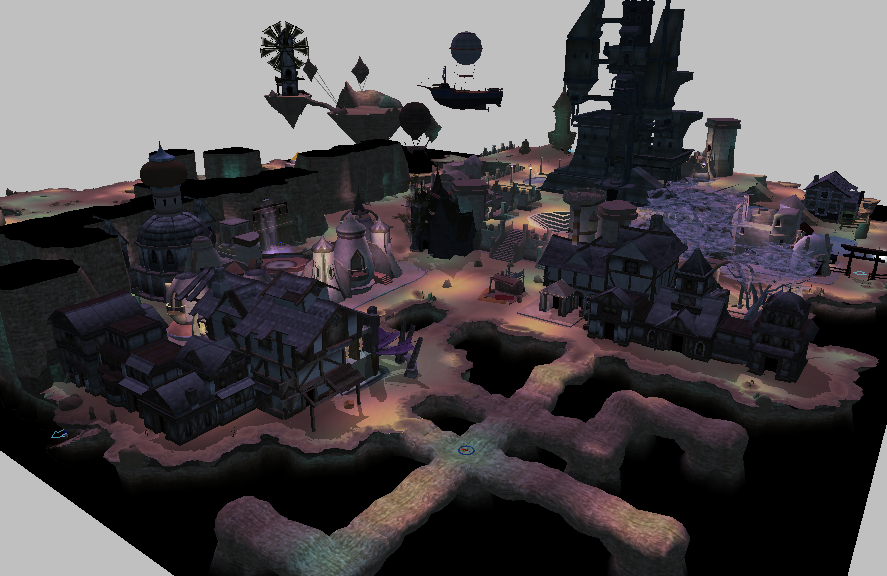 Netheril's Ancient Floating Cities, The original concept of Rii Nor-Veran (Which I love, but I feel the finished product went in another direction), Bioshock 'Infinite', FR Sigil & Underdark, Skyrim's Mages' College and Hogwarts (Don't hurt me) and elements of Saban itself.

Player Housing will be very limited and highly customised, there will be no cookie-cutter doorways to purchase, only custom-built niches for PC's who wish to carve out a place for themselves here. This is something I've come to appreciate a lot playing here, it means alot to people when they can have the perfect setting crafted to suit their character concept.

The Isle itself will grow to contain a warren of inner tunnels and passageways, filled with trouble for the wandering visitor to tangle in. Tunnels may be a mixture of man-made labyrinths and sewer systems and natural caverns containing all manner of secret corners, where resident mages have hidden their mistakes and valuable successes in equal parts over the years.

Encounters will be staged as -
- Escaped experiments from the Academy
- Dropouts or wandering students & vandals
- Sky-Pirates & slave-traders
It will be obvious that these are the dregs of society, or those daring enough to venture down into the tunnels (And hence, deserve the painful, fiery death PC's will visit upon them!)

Ideally encounters will be scaled to expand on the number of options available for those levelling their characters as well as providing some more interesting Epic Level Content to give fully levelled characters a challenge.

I would like to tinker with additional levelling paths for unconventional builds, trap-and-lock filled death chambers perhaps, rewarding rogues for testing their prowess, but will have to see what guidelines are in place for this sort of thing.
Top 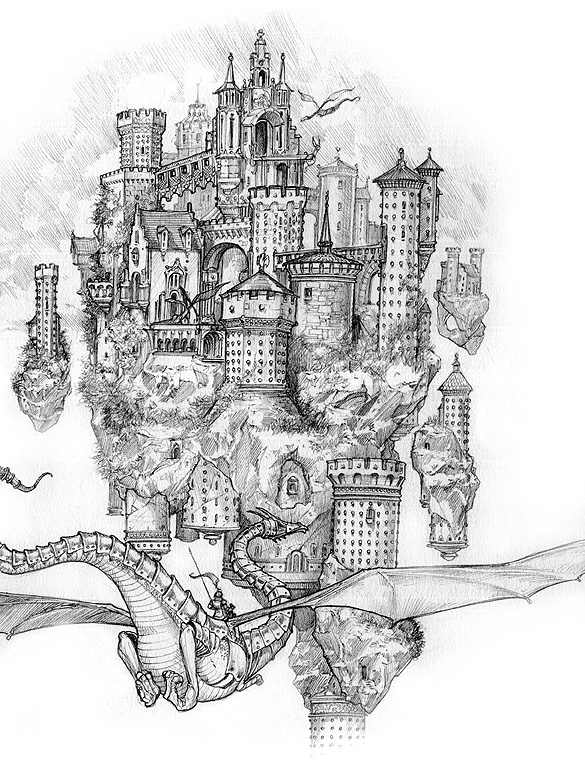 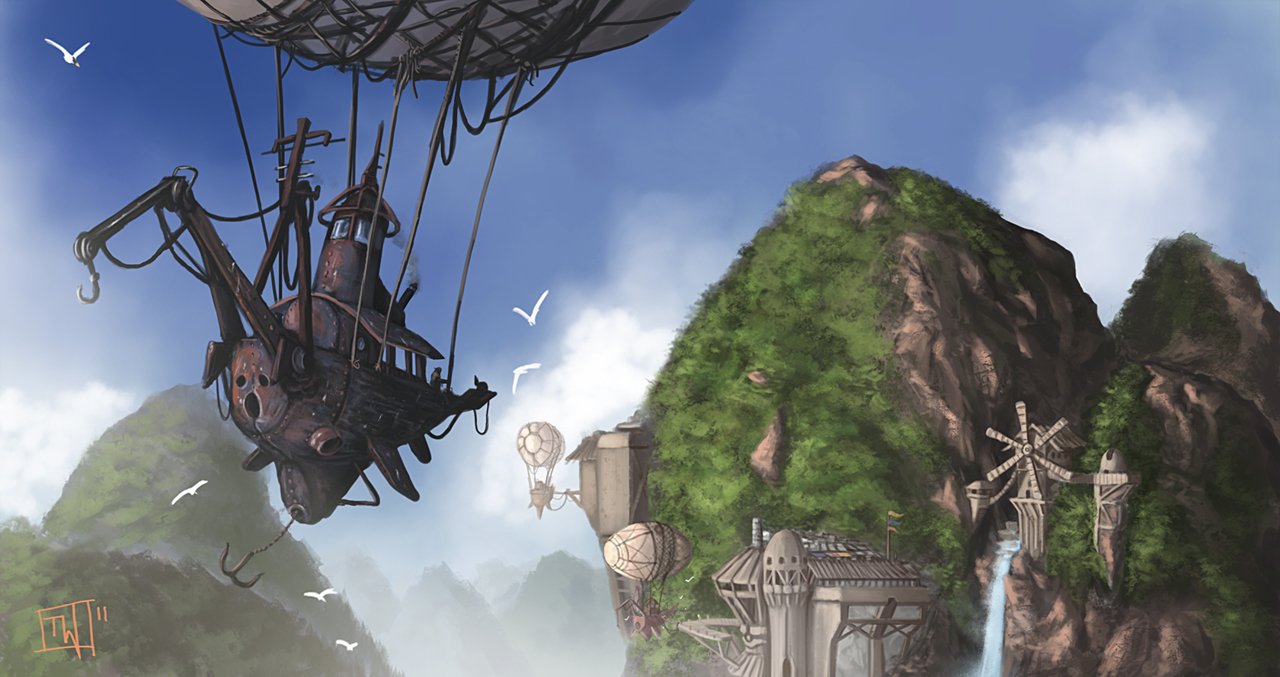 Return to “Esus - The Floating Isle”

Users browsing this forum: No registered users and 1 guest